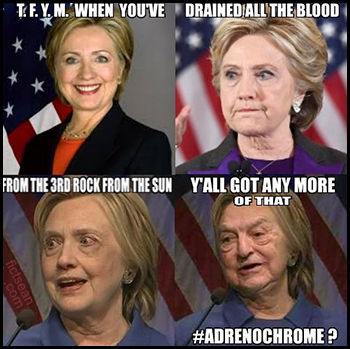 The face of evil. This is what that is:


The original ducumentary of two hours.

The situation in the U.S

This mother decides to do some investigation on social media concerning her daughter. She was shocked:

The C.Y.M usb-stick in Germany provided by Amazon


Someone in Germany placed an order for a new USB stick at Amazon. He received one with an opened up seal. There appeared to be some compromising data on the stick.
Just google "adrenochrome" and you'll find out what..The intro is in German. After the intro there's a list in English with more than 400 young children on it, held in custody in the U.S.A, Canada, Porto Rico and Mexico. A lot of them attempted to commit suicide. The attempts are also stated in the list. The lay out is cold bussiness-like. The children are in the age between 6 to 12. The listing surely looked quit real to me?! I used to be sceptical about this... very strange stuff. If this is true then it is the MOST evil thing i've ever heared of.


It appears that a big amount of the world's elite is addicted to this stuff that's harvested from little children's brain or so. It's supposed to slower down the aging process at humans.
Further on in the PDF there's also a "hunting list". I'm curious if the police/ Interpol FBI, Europol what ever knows about this. We should warn the parents, or are those parents also into this shit?
There are also 6 status sheets of children that are in abuse right now. And on these sheets is a "date of disposal" noted aswel!! Maybe the "2021" ones are dead already?

The inmatelist, young children, in PDF here. Open at your own risk.

"Adrenochrome is a chemical compound with the molecular formula C₉H₉NO₃ produced by the oxidation of adrenaline. The derivative carbazochrome is a hemostatic medication. Despite a similarity in chemical names, it is unrelated to chrome or chromium."

"Adrenochrome: An Immortality Serum obtained from the adrenal gland of living children after they have been terrorized to get the highest levels of adrenaline. It has LSD like qualities and is used in satanic rituals by monarchies, politicians, congressmen, celebrities, CEO’s and the elite."

You can find the flightdata of the U.S. uber-pedo, Epstein, here. The Duke of Kent, f.k.a Prince Andrew of the U.K. and a few wel-known actors are on the list too. Mark Epstein became known for his child torture and murder temple on a private island in the Pacific. This elite- billionaire created a underground network of tunnels and chambers (he called them "diningrooms") on this island for torturing, raping, adrenochrome harvesting and satanic sacrificing purposes.
Bill and Hillary Clinton paid a visit to this temple aswel. Their names are also on the list. Someone leaked the Mark Epstein flightdata to the press. He commited suicide in prison. At least, that's what the press told us.
Lots of the worlds elite is taking part in this world-wide operating child murder scene. 4.5 mln children are reported missing on a yearly basis worldwide. 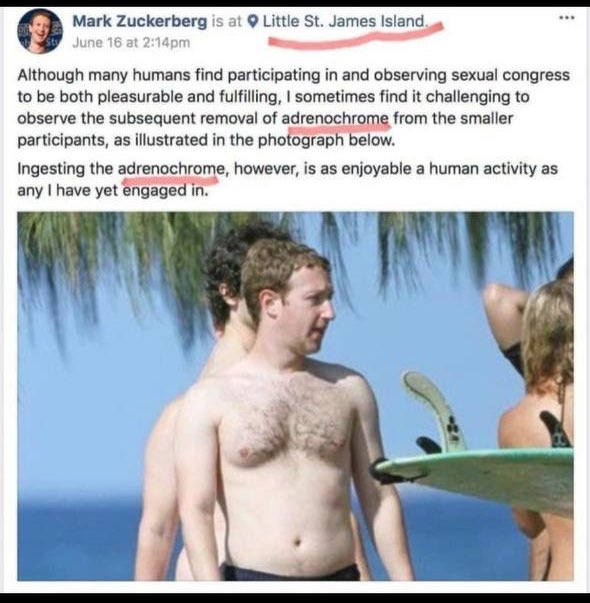 Former FBI inspector Ted Gunderson did a lot of research concerning childmolesting by the CIA and the Illuminati, webpage here, lots to find there.